Fear is a hard feeling to capture and induce. Some people will wonder why someone would like to induce such “terrible” feelings as fear, horror and despair. Many games have tried but few have succeeded; I even wrote an article about the lack of real horror in most games of today, some of which actually say they are horror games but are far from living up to that statement. After writing that article I found out about Amnesia: The Dark Descent, but haven’t gotten time to play it until now. Read about the horrific experience!

Not about the tech

If you are expecting beautifully rendered monsters and massive, gothic castles with intricate carvings and design, you will be a little disappointed. This game is all about giving the atmosphere based on small details, such as a small change in the continuous beating sound or the creaking of a door. To be honest, the game looks a bit dated, but that is not a disadvantage at all for Amnesia: The Dark Descent. It instead gives you a rustic feeling somehow; the designers haven’t spent hours putting small and scary details on the environment; instead they have focused on the overall atmosphere, the feeling you get when you walk around in the game.

This again proves what I wrote about in this article true, that games certainly don’t have to be graphically advanced to immerse players or even to make them be amazed by the environment. In this game the immersion is made up of two things. The first is the darkness and the unbending unknown that darkness can hide (or reveal, when something suddenly staggers around outside the door, and your only way of survival is to stay quiet inside a wardrobe). The second is the perfect use of tech power they have. There are of course many effects that are very well placed, which plus the perfect timing of the sound effects make up for the quite outdated graphics.

Even if the graphic isn’t the newest CryEngine, it does its job and with the perfect sound effects and well-designed levels, the level of immersion is amazing

All about the immersion

When you start, you get a message on the screen stating that you shouldn’t strive to finish the game as good as possible (or as quickly as possible, I might be mistaken), but the point is that the designers behind the game want you to immerse yourself in the game; that is the main goal with playing Amnesia: The Dark Descent. There is no big clock ticking away the seconds until the game will say “game over”. This game is all about immersion.

The team behind the game also recommend you to play the game using headphones and in darkness, and that recommendation I strictly followed. Playing in darkness and with headphones on gives an extra factor to the immersion; it blocks out almost all external influence on you and you are totally dragged into the game, whether you want it or not; although I guess you want to be immersed in the game, since this is not a game you just play to kill a few spare minutes.

The story puts you inside a mansion or castle, from the start you don’t know too much. You have to find clues about why you are there, what could have happened to the people there, your relation to the baron that lived in there earlier and so on. Some of the diary entries you find throughout the game are quite well versed and have their own horror feeling to them; tellings about scientific expeditions gone wrong and other stories.

You play in a first person view, but you also interact with the mouse directly on objects, like a point-and-click adventure game. Some objects can be picked up and collected in an inventory, but don’t expect you will find any holy items or weapons to scare the bad guys away. You are most of the time left with the only option to hide or run away when you see something moving in the distance; if you manage to avoid or hide for some time, the danger will mostly disappear.

What keeps you together is your health, of course, but more important in this dark environment, is your sanity. If you stay in the dark for too long or stirring things happen around you, your sanity will get a bit “damaged”. You can regain some sanity by being in a well-lit environment or solving puzzles and challenges. The calculation on how much darkness you can take will be one of the things you’ll learn. To brighten up some dark places there are candles and torches to lighten, but they require you to use tinderboxes, which are quite scarce and hard to find. This will make you, sometime, go into dark places just to save a tinderbox; but this will also make you more scared, because in the darkness scary things can hide! Of course, the level of how scared you get, depends on how immersed you are; hence the recommendation to play in darkness with headphones.

To stay alive and sane, you need to light candles and torches. Staying in the dark causes your sanity to drain!

One of the scariest moments I have experienced in gaming took place quite early in Amnesia: The Dark Descent. You get down to some kind of basement or so, but after a few steps the floor is filled with water and you start wading through it. A few seconds go by and you start hearing splashing sounds, as when someone is running through water and you also begin to see splashes on the surface, coming right at you, but you don’t see anything or anyone running! This invisible monster killed me quite many times… You have to jump on boxes to avoid it, and sometimes there is a big distance between the boxes forcing you to enter the water before you can scramble to safety again, with your heart pounding at 180! When you enter the water the invisible creature directly runs toward you and you struggle to get to the next box, in order to survive. And it gets worse… Being chased by an invisible monster, which is making horrendous noises, especially with the splashing, makes it very real somehow.

A few times I actually didn’t want to play more, partly because I was tired but partly because I was a bit emotionally exhausted due to the tension, especially after the wading in water part! It was a bit funny actually; I have always looked for scary games and now I finally found one and I got really scared I must admit, but it was also a nice feeling somehow at the same time; mostly because horror is a seldom triggered feeling and also since you know deep down that you can press exit anytime you want.

Even though the game is about getting immersed in the horror filled mansion, there are a few short periods of relaxation also, which is needed. Too much darkness or shivering moments would tire the player and make you play less. The designers of Amnesia: The Dark Descent solved it by leaving some areas less filled with horrors and more filled with puzzles. Of course, you don’t know if you are in an area which is free from horror, but after a while you let your guard down and focus on the puzzles.

Some puzzles are a bit hard to solve while others are more of small games of their own. Most puzzles require you to go around to different areas, gathering materials and objects to use on the machines you want to get started or concoctions that you want to mix. It is actually the puzzles, small as big, that give the most structure to the game which at a few times can feel a bit loose, almost like you are just going around in the mansion with the sole mission of getting scared. 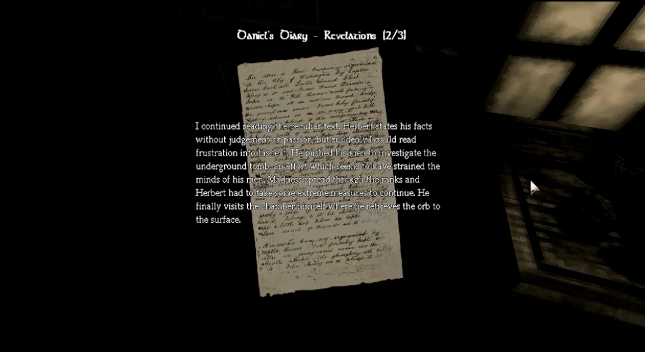 Notes, mementos and pages from diaries are found throughout the game, giving hints to puzzles but also pieces to the story

There have been few movies and books that have scared me, at least after my teens, and even fewer games (if any), but Amnesia: The Dark Descent takes a shivering hold of your heart and it doesn’t let go until you turn on the light and exit the game. The immersion level is one of the highest I have experienced in a game; though this requires you to play the game sitting in a dark room with your headphones on, “letting” yourself be sucked into the game world.

Do you want to get scared? Are you ready to face true horrors, where the only escape is to hide in a dark corner and wait until their growls disappear in the dark corridor, never knowing when you have to run to stay alive? If you feel you are up to it, then you will get a superb treat out of Amnesia: The Dark Descent!

2 responses to “Amnesia: The Dark Descent”