Final words on The Legend of Zelda: Skyward Sword

A few days ago I finally beat The Legend of Zelda: Skyward Sword. It was also a bit sad, as with every time I finish a game I have spent quite some time with. It was an amazing journey, with its ups and downs. Here I have noted my reflections on its superb puzzles, living environments and much more!

One of the things that really stands out in the Zelda games, from the old classic Zelda to the latest Skyward Sword, is the puzzles. The earlier Zelda games, like The Legend of Zelda and The Adventures of Link (Zelda II) had a lot of basic, mathematic puzzles, for example go five screens up and then one screen to the left, then a new world will appear. These puzzles, which to some extent were based on the limitations on the game (e.g., can only show one screen at a time) are harder to pull off in more modern games.

In Skyward Sword there were some really cool challenges for your mind! One example is from the later part of the game, where you can rearrange a whole temple based on a moveable map. This required me to cut out paper pieces resembling the rooms, in order to be able to get a good overview; it was very hard to solve it just staring on the screen. After a few minutes rearranging of the pieces of paper I found the way to do it, and to my joy it worked in the game also! Another great puzzle ingredient that they included in the game was time-shift stones. A small area around these special stones is transformed to the state it had a long time back in history. Some of these stones are fixed while others can be moved around, either by you or on some devices. All these combinations make up for some really mind-scratching challenges!

Ah, the game world of the Zelda games must be one of the coolest and most beautiful game worlds around. Sure, The Legend of Zelda‘s game world were quite square, but that doesn’t mean it didn’t have a varied and living environment. On the contrary, starting from the very first Zelda game to the latest iteration in Skyward Sword, the game world has been one of the strongest features in the games. There are always big, green forests involved and these are mostly alive in one way or the other such as Ocarina of Time with the Deku Tree (and its sapling) or the Kikwi in Skyward Sword.

Another great thing in Skyward Sword and its environment is the variety; there are many areas to explore and these differ quite much from each other, but they are all equally colorful, amazingly designed and filled with life and hidden treasures! Poor variation of environments is many times the weak spot of many games; you are either forced to run through the same kind of place 100 times or have to revisit some annoying place many many times. This was actually the case in a Zelda game (they DO have their share of problems also), namely Phantom Hourglass. In that game you have to go back to the Temple of the Ocean King, repeat many puzzles several times, although each time you had some new equipment, but anyway the first puzzle were always reset and had to be repeated, time after time. 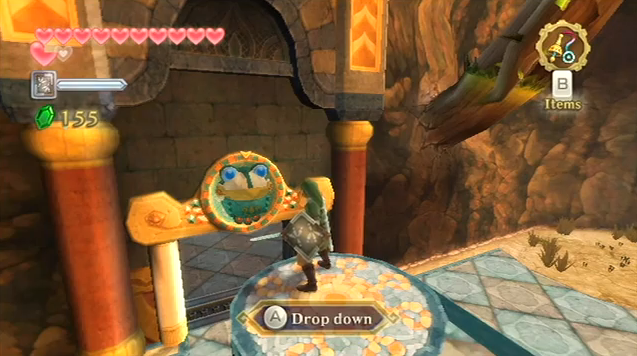 The game never became boring, mostly because of its diverse and colorful environments

The colors used on the environments in Skyward Sword is also perfect. Even though the Wii is quite weak when talking about sheer power, the designers and animators have done a fantastic job, using every little piece of the hardware and making the game look great even though the resolution and detail is not as superb as for example in Dark Souls or L.A. Noire. The first times I played Skyward Sword I compared it to Twilight Princess, which I mostly played on the Game Cube, and were a bit disappointed, but after a while I found out that Skyward Sword has a game world which is beautifully designed and, once again I have to say this, very colorful and varied. One heights of the design is the Silent Realm, which you enter a few times to be tried on a special trial. In it, the color of the world changes scale to gray, white and dark hues of other colors.

One thing I missed in Skyward Sword is the fights, there are very few really challenging fights in the game. Sure, I had a problem beating up the venomous flowers in the beginning of my play sessions, but that was due to the problems and inaccuracy of the controls. Really tough fights, where you meet a knight that will smash half of your heart containers if you don’t move smoothly enough were nowhere to be found. Early in the game you meet different variants of some kind of goblin, and this enemy returns throughout the game and it never gets harder or tougher, even when you have tripled your amount of hearts and have a very powerful sword, you meet this same enemy over and over again. 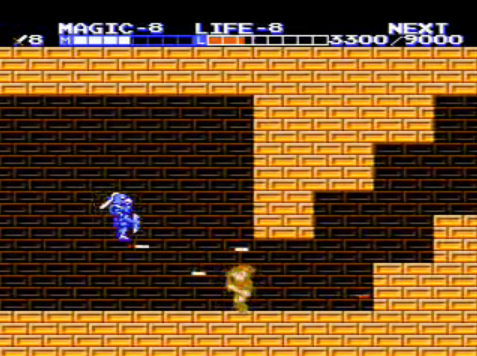 The blue, jumping [!!] knight from Zelda II is probably the hardest enemy (excluding bosses) you can meet face-on in any Zelda game. You are lucky if you can escape from it to a safe place, otherwise mostly death awaits…

I love challenges, both of the mind and of the use of skills such as how to handle the sword. It is quite remarkable that this game, with its supposedly move-controller-sword-follows facade, have so few really cool sword fights. Where are the real duels? I remember the knights from the first Zelda game and I think there were at least three versions, one harder than the other, and it was the same in Twilight Princess. Sure, the final in Skyward Sword was against an opponent who carried a sword, but not even this one was challenging. At the point I reached the final boss I was quite tired and planned to turn of the game; I just wanted to check it out. It ended up with me beating the boss on my first try and I didn’t even fight so well!! What happened Nintendo, why can’t you make challenging games anymore (at least not sword-wise in Skyward Sword)!? Sure, it doesn’t have to be as hard as Dark Souls, but at least let the player die a few times.

I will not spill my guts over the controls of the game one more time (you can read about them in the review and in this reflection), but they were the major flaw of this game. And when I think about it, it is probably not the game that has the problem, it is actually the hardware and the sensor of the controller that is the main issue. If the controller were smooth enough and could follow your every move as it is supposed to do, then this game wouldn’t have made me frustrated quite a few times, when the character or his movements didn’t reflect my movements of the controller…

A great adventure in an amazingly living world, with great challenges, mostly for your mind. There are loads of secrets, quests and small challenges to be discovered. Even thought the controller can be frustrating at points, don’t let it stop you from playing this cool game. Most of the time you will have a blast in Skyward Sword!

The Legend of Zelda has most you can ask for in a great adventure. Even with its above mentioned flaws I strongly recommend you try it out; give your Wii a final adventure before moving on to Wii U!